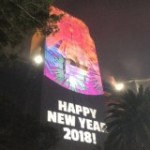 Sydney is one of the first cities on earth to ring in the new year, but revellers around the famous harbour could last night have been forgiven for winding their clocks back.

As a spectacular fireworks display lit up the sky at midnight, a giant typo was beamed onto a Harbour Bridge pylon telling the crowd it was still 2018.

An estimated 1 million people braved stormy conditions in Sydney , which was expected to be watched by more than a billion people around the world.

People took to social media to highlight the gaff.

“Were they playing ‘If I could turn back time’?” said another, in reference to the iconic song by Cher.

Other users dubbed it Groundhog Day and dreaded the prospect of having to relive 2018.

Sydney Harbour lit up with 8.5 tonnes of fireworks as the clock ticked over to midnight, with thousands sticking out an evening downpour to secure prime vantage points for the spectacle.

The with more than 8mm of rain falling in the CBD, mostly in the evening.

About 16mm fell in Canterbury and 10mm tipped down in Marrickville.

In Newcastle, the New Year’s Eve fireworks were cancelled due to a thunderstorm.

A Newcastle City Council spokesman said safety concerns about the rain, lightning and wind meant the event could not go ahead.

The display is expected to be rescheduled.