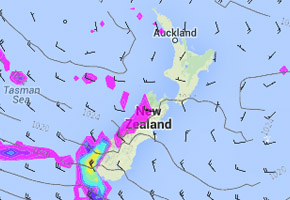 The weather on Monday is looking fairly good across most of the country, a ridge sits over the North Island while a northwesterly airflow lies over the South Island.

The upper North Island is looking mostly sunny with light winds, tending southwesterly in the west. There may be periods of cloud along the west coast from Northland down through to Taranaki. Temperatures all in the high teens.

For the lower North Island including the east coast the weather is looking mostly sunny as well with light winds, tending northerly about Wellington. Once again there may be some cloud in the west. Temperatures in the high teen area for most although Wellington will get to 16. The east
coast may even sneak into the early 20â€™s.

As we head into the South Island the picture is all to familiar. Cloudy skies in the west with rain
developing about Fiordland in the morning with heavy falls after midday, further
north rain is patchy with dry periods likely at times. About Nelson and along
most of the east coast conditions are dry and mostly sunny, high cloud moves
into Otago from afternoon. Expect high cloud for Southland with northwesterly
winds, the odd spot of rain from late afternoon.

Temperatures for the South Island are in the high teens for Nelson and along the east coast, the West
Coast and Southland will likely be in the mid teens.

The weather is very westerly orientated this coming week with the main feature being a front on
Wednesday that delivers rain in the west and showers for most eastern regions.