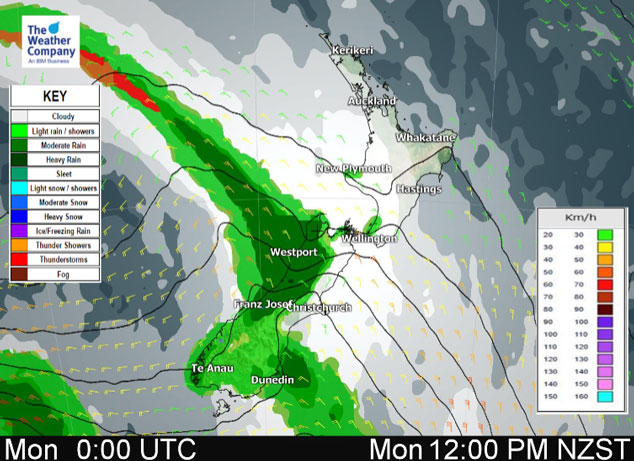 A northwesterly airflow lies over New Zealand today, a cold front and accompanying southwest change develops about the lower South Island this morning reaching the lower North Island around midnight. This front will weaken as it moves northwards.

Expect a mix of sun and cloud for the upper North Island with light northwest winds, mostly cloudy for the lower western North Island (Taranaki to Wellington) with the odd spit, becoming a little more widespread later in the evening / overnight for a time. Strong to gale northwesterly winds through Cook Strait. The east coast has a dry day with high cloud.

High cloud for Canterbury, strong northwesterlies this morning north of Banks Peninsula then easing. Heavy rain spreads into the high country around midday then clearing late afternoon. Mainly dry nearer the coast, a southwest change does push through mid afternoon but only delivers the risk of a shower, it will bring cooler temperatures though after a warm morning / early afternoon.

A period of rain / showers moves through Southland early this morning then Otago by midday with a cool southwest change, clearing late afternoon. Overnight further showers move in.