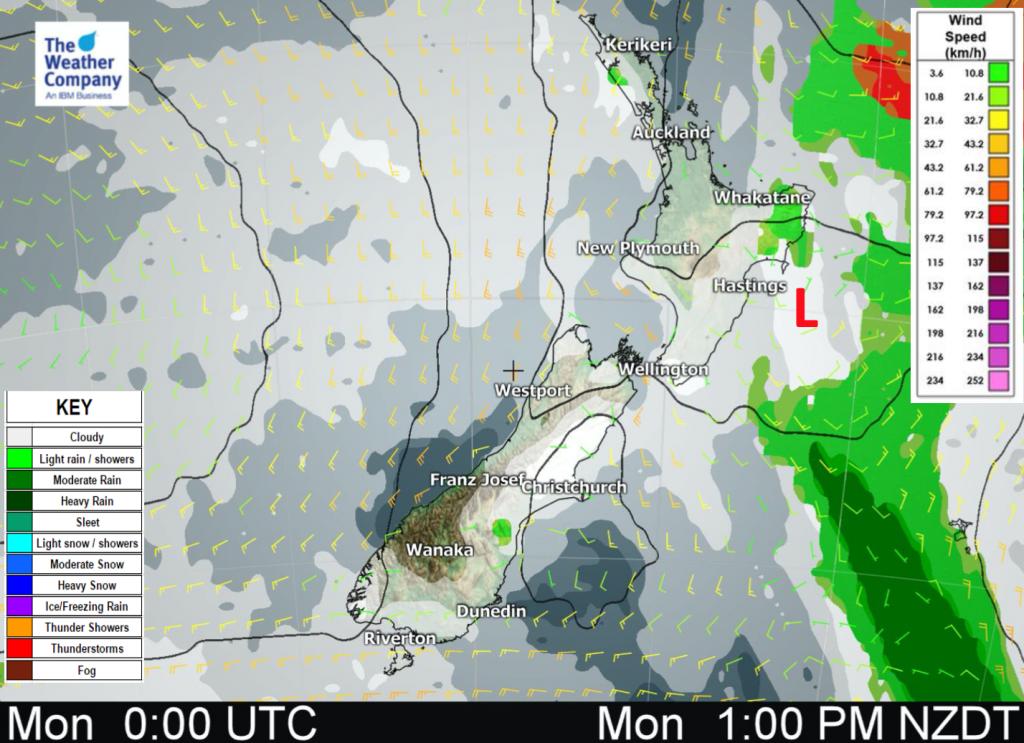 A weak low pressure system lies off to the northeast of the North Island today meanwhile a ridge sneaks in over the South Island extending out from an anticyclone in the Tasman Sea.

Some cloud for Northland and Auckland with southwest breezes, chance of a brief light shower or two otherwise mainly dry. The Waikato is mostly sunny although there may be some cloud in the north of the region. The Bay Of Plenty is mostly sunny also, some cloud at times from afternoon as light winds tend Northerly. Mostly sunny about the southwestern corner of the North Island (Taranaki through to Kapiti), some high cloud at times and freshening south to southeasterly winds.

Southerlies freshen about Wellington this morning bringing mostly cloudy skies, chance of a light shower. Cloud thickens up about Wairarapa by midday then Hawkes Bay in the evening with showers. The odd light shower about Gisborne / East Cape from morning.

Expect a mostly sunny day for the West Coast, any morning cloud breaks away. Nelson is mainly sunny also however expect some cloud to increase from afternoon. Canterbury and Marlborough have mostly cloudy skies with southerly winds, tending easterly in the afternoon for Canterbury. There may even be a light spit or shower at times otherwise mainly dry.

Morning cloud about Southland may bring a shower then sunny areas increase from afternoon, Central Otago has a mostly sunny day. Coastal Otago has some cloud, especially Otago Peninsula northwards with southwest winds tending easterly in the afternoon.