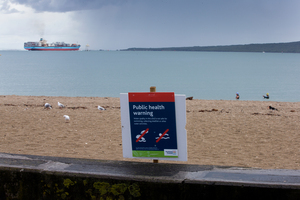 Earlier this week, Auckland Council had advised against going into the water after tests showed high levels of enterococci bacteria, which feed off faeces.

Signs were erected at the beach on Wednesday evening warning people about swimming and collecting shellfish from the beach.

The problematic test results were from regular weekly water quality testing, carried out at all of Auckland’s 63 beaches.

None of the results from any of the other beaches had come up positive, the council said.

This afternoon, a council spokeswoman confirmed a second lot of tests – performed yesterday – had showed the water at Mission Bay was now safe.

While the first lot of tests showing high bacteria levels at the beach had been “surprising”, confirmation the water quality was back to normal at the beach was reassuring.

It was not known why the first lots of test results had showed high bacteria levels, the spokeswoman said.

The results could have been caused by a range of things, including a dead animal’s carcass floating by, waste from boats and also a false-negative result.