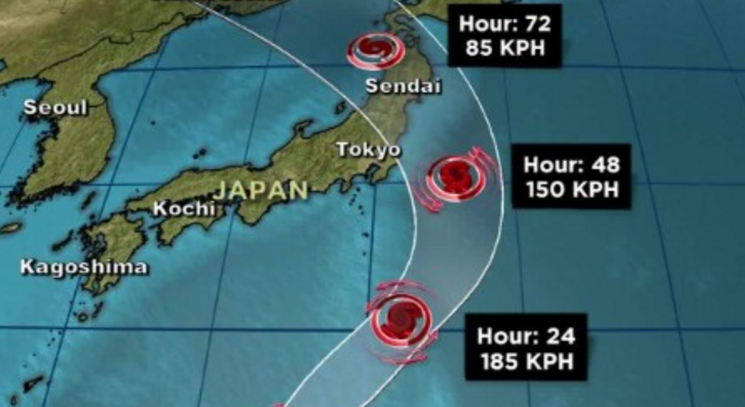 Just a week after the deadly Typhoon Mindulle and Kompasu pummeled Japan, the country is bracing for another powerful typhoon to hit its eastern side.

Currently over the western Pacific close to the southern islands of Okinawa, Typhoon Lionrock is moving northeast at 20 kilometers (12 miles) an hour.
It is expected to brush Kagoshima before pivoting northwest toward the capital Tokyo and Sendai by Tuesday.
“Sustained winds of Lionrock now at 205 kilometers (127 miles) an hour, equivalent to a strong Category 3, nearly teetering on a weak Category 4 Atlantic hurricane,” CNN’s Derek Van Dam said. “A very defined eye within the storm system.”
Japan’s Meteorological Agency has issued an advisory warning of high waves and thunderstorms all up its eastern coast.
Both Japan Airlines and All Nippon Airways have warned of possible disruptions to flights. Routes to and from the Kanto region — encompassing Tokyo on Honshu, Japan’s largest island — may be affected, the airlines warned.
– CNN for more information