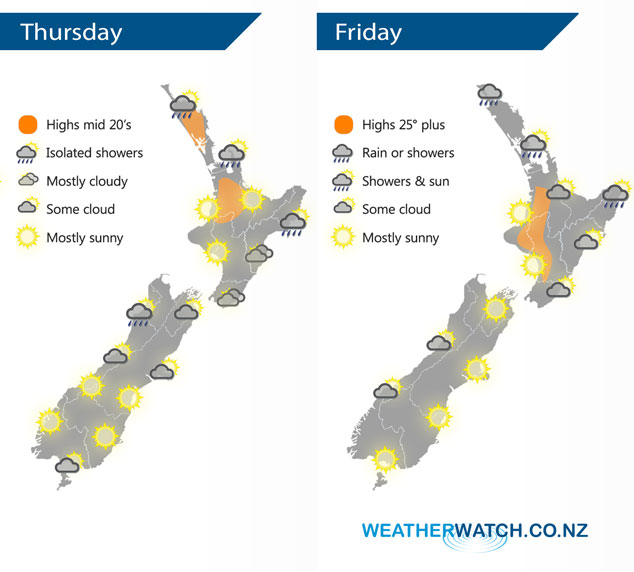 An anticyclone lies over the South Island today, southeasterlies further north. This anticyclone brings mainly settled weather to New Zealand on Friday. An east to southeasterly airflow around this high brings the odd shower to some east / northeastern parts of the North Island.

A few isolated showers about the Coromandel spread into Auckland / Northland during this afternoon. Cloudy areas in the east with the risk of a shower about the coastal fringe, especially Mahia Peninsula. Mostly sunny for the rest of the western North Island. The South Island has a mostly sunny day, morning cloud for Canterbury and Marlborough clears. The odd shower moves into Buller at times.

A shower or two for Gisborne, Coromandel and Northland (especially in the east) on Friday. Sunny spells elsewhere for the upper North Island. Morning cloud breaks about Wairarapa and Hawkes Bay to mostly sunny weather from afternoon. The southwestern corner of the North Island has a mostly sunny day. Mostly sunny for the South Island, there may be some cloud at times about the ranges along the West Coast.