In the mixer – Wednesday’s situation & outlook 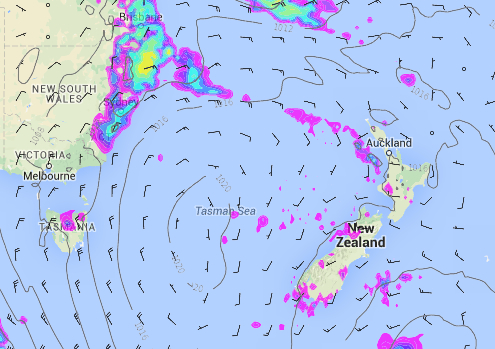 On Wednesday it’s a fairly complicated weather situation over the country – we have a weak area of low pressure over the northeast of the North Island, and an anticyclone to the south of the South Island.
In between these, adding to the confusion is a southerly airflow – so conditions will vary considerably depending on where you are.

The West Coast is looking sunny and calm, with only gentle southwesterly winds to speak of.
On the opposite side of the island, there will be periods of cloud for Southland, while early showers will disappear in Otago to leave a mostly sunny day in their wake.

Canterbury farmers will be happy with their Wednesday outlook, as showers and southerlies are picked to persist for much of the day, before clearing overnight.
It won’t be widespread or sustained by the looks of things, but it’s something positive at least.

Marlborough will see a fine sunny start to the day before things worsen – thickening cloud and a few showers are possible in the afternoon.
Nelson, meanwhile, is mostly sunny – with light southwesterlies in the morning and then a northerly change in the afternoon.

The upper North Island is looking at something of a mixed day – with sunny areas and high cloud, along with south to southwesterly breezes for most.
Eastern Northland can expect more southeasterly winds, while the whole region is looking slightly cloudier than areas further south.

The Bay of Plenty will start the day with light winds, before north to northwest winds take over, and then turn southerly overnight.

Did you forget half the North Island? 😉