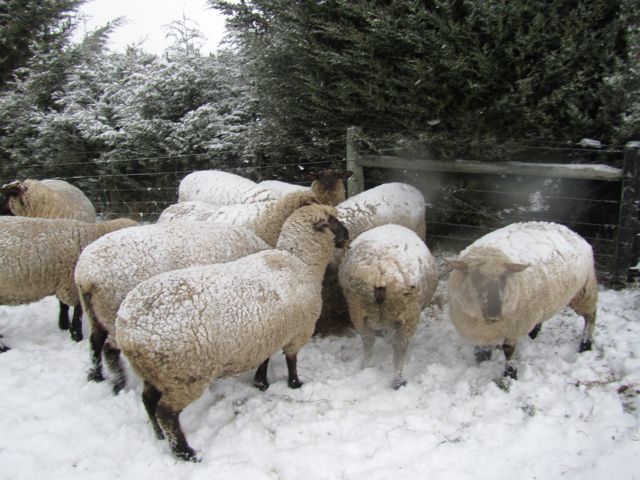 Further snow has swept into the south yet again in another wave of wintry air and parts of the North Island are continuing to see wintry conditions with snow to very low levels.

“Some of the conditions here in Canterbury are just treacherous. It’s gone up a notch inside the last hour here and in some cases it’s a blizzard with driving snow and howling winds” says Weather Analyst Richard Green.” Some of the snow is quite fin in some cases and yet very thick in others. It’s likely to come and go much of the days” says Richard Green.

Aucklanders endured a stormy night with high winds and hail reported in many areas and this morning temperatures remain cold and wintry.

Police advise to only travel if necessary in some regions and Christchurch drivers are being advised to stay home unless absolutely necessary. Snow is now between 10-20cm on the ground and more falling.

“It’d different from our snowfall in July but the wind is causing drifting” says Richard Green. “It’s definitely colder and more miserable for those who have to brave the outdoors” he says.

WeatherWatch maintains that this freezing air is quite long lasting especially for those exposed to the southerly and once the clearance comes through, some very hard frosts are expected in many areas.

Well it’s fair to say that i got my wish.Between 2 and 2.30 snow started to fall in Blenheim..started off lightly then gradually got heavier..it lasted for around an hour…then it stopped..even the sun tried to come out.Then around 4ish we got another lashing of snow..lasted for maybe 30mins or so.The snow wasn’t settling on the ground..but far to say it was very impressive.Don’t know when the last time it EVER snowed in Blenheim.Time will tell if we get more.

It was always going to be a late winter (although NIWA predicted otherwise back in April: “An early, but slightly warmer winter than usual is on the way..”
http://www.nzherald.co.nz/nz/news/article.cfm?c_id=1&objectid=10722281)
September should resemble a July and the last cold icy blast should arrive in the first week of October.

Yes, you were much more accurate Ken “…there would be no snow on the mountains until August”  http://www.nzherald.co.nz/nz/news/article.cfm?c_id=1&objectid=10734595. Wonder what people were sliding around on in the middle of July then? http://www.weatherwatch.co.nz/content/storm-brings-snow-ski-fields-injures-thousands-seabirds. ;

And if you read the actual article rather than the journalist produced headline, you would realise they were referring to the May/June period. Perhaps you could also read the actual outlook itself. There are explanatory notes on the bottom which explain probablities, I expect you will struggle with this.

That wasn’t what I said, I was misquoted. On the very day of that interview it was even snowing in the mountains so I obviously wouldn’t have said that!  I had said August would be the main month for skiable snow, part of a late severe winter. NIWA had already been obviously wrong for their early winter prediction and I was describing a late season to the reporter, with July so moderate it would be hardly a winter month for some farmers. That pattern is playing out. NIWA was wrong, as usual, and winter is more than May/June. Yes, people were skiing back in July but it was mainly on machine snow. The winter is just beginning now as was predicted two years ago. If you look on p333 of my almanac you will see my isobaric map of 16th and 17th matches the Australian metservice map for today. My worry is the potential for another full-moon-related earthquake in the South island during the next week, on top of the cold outbreak.

It’s amazing how often that happens. What you need to realise, is that the days when you could say what you like to the media only to have it wrapped around someones fish and chips a few days later are long gone. It is so easy to check what you have previously said, and those that do find inconsistencies, contradictions and predictions (opinions) that are just outright wrong. If those journalists had bothered to check, then they wouldn’t have won the bent spoon award for gullibility.

Snow is coming down constantly and fast. Already a couple of cm’s deep. Mountains and grass is white with not a hint of green. Looks like an all night thing. Beautifull thou. We live on a lifestyle block and there are no words to describe it.