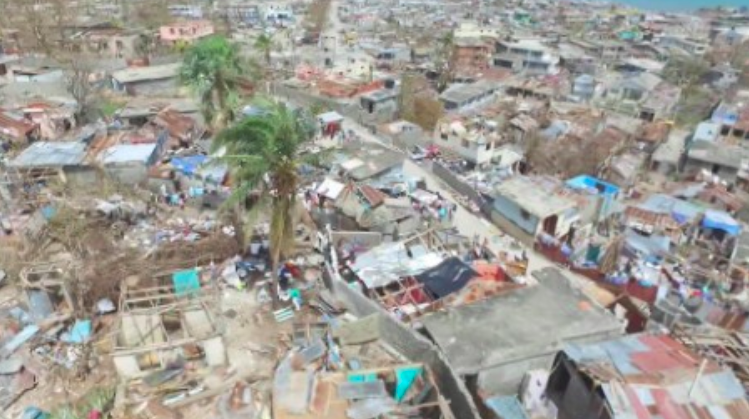 The 35-year-old squats in the corner of his bedroom with his arms over his head, re-enacting how he, his wife, two children and elderly father cowered as nature unleashed its fury.  “For hours,” he says. “In the rain, in the wind.”

Today, the family is sleeping in a shelter on the other side of town, their 11-year old daughter sick with a fever she contracted after the storm.
In the meantime, Saint-Plux, who made a living as an English interpreter, is trying to figure out how to scrape together enough money to rebuild the roof of his house and keep his two children in school. It’s a challenge facing nearly everyone in this devastated coastal town.
“This same thing happened to all my neighbors,” he says, pointing across the street.
‘Three days of terror’
It’s all part of the “apocalyptic situation” Haiti finds itself in, interim President Jocelerme Privert said.
“Unfortunately, once again, nature has unleashed her fury and Haiti has lived through what I can characterize as three days of terror,” he said.
In addition to destroying homes and schools and devastating Haiti’s natural resources, the hurricane accelerated the rate of cholera propagation and postponed the presidential election. Privert was appointed after the presidential election, scheduled for October 2, was postponed.
“With the very little time I have left in this office, I have only two priorities,” he said. “The Haitian government must demonstrate its willingness, not only to urgently address their commitment to the victims of the hurricane that demand urgent attention, but also we need to reinforce our institutions.”
An aerial view of the destruction in Casanette, Haiti, caused by Hurricane Matthew on October 8.
Read CNN’s full coverage here