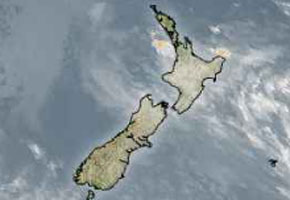 The cloudy weather persists over the North Island today with showers here and there, and normally in a southeasterly airflow you would get sunny breaks west of the Central North Island but not so this time. The sunnier skies look to develop in the west tomorrow. Mild temperatures north of the Waikato around 15 or 16 degrees, a few 18’s and even 19’s in Northland. Low double figure temperatures for most other areas with east to southeasterly breezes.

The South Island’s West Coast is sure getting it good, currently 16 degrees in Hokitika with clear sunny skies. North of Greymouth skies are cloudier with a few showers, Westport looks like it has had a reasonable patch of rain pass over in the last half hour.

Cloudy skies hamper the top quarter of the island with showery conditions, it is also currently cloudy along most of the east coast with showers down through into South Canterbury. Sunny breaks are now pushing into Southland however and should get into Otago and perhaps South Canterbury later this afternoon.

Nelson and Marlborough are currently around 12 or 13 degrees, cooler along most of the east coast with high single figure temperatures.

If its a tight enough southerly close to a low,Auckland can get some of its wettest days from it ie not over the ranges.

It’s been sunny after a frost in Invercargill but looking north, it looks like the odd cloud moving in from the east.