High chance of a Coral Sea cyclone forming, may drift towards NZ (+2 Maps) 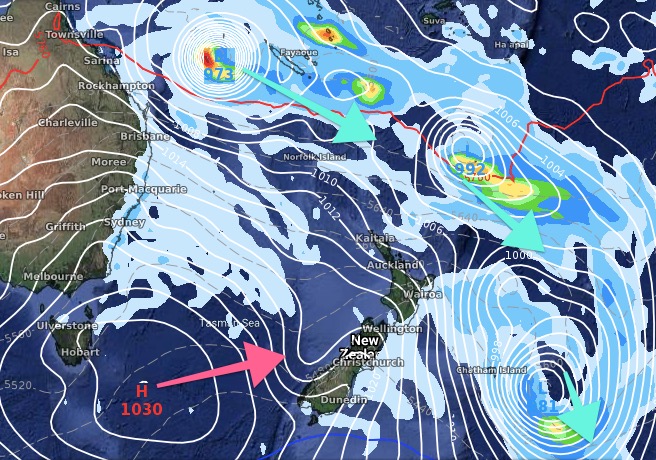 Australian forecasters, in their 3 day outlook, give it a “moderate” chance of developing on Thursday into a cyclone. WeatherWatch.co.nz says the chance then lifts to high on Friday and Saturday as it grows in the Coral Sea – an incredibly warm body of water, perfect for fuelling tropical cyclones.

The cyclone may also become a “severe” category 3 and above storm.

“March is the peak of the Tropical Cyclone season so a tropical storm at this time of year in the South West Pacific is normal” says WeatherWatch.co.nz head forecaster Philip Duncan. “Sea surface temperatures are now at their warmest and this storm will be in an ideal area to grow with all the right ingredients and fuel”.

Another area of low pressure near New Caledonia looks likely to gently pull the cyclone south eastwards away from Cairns and Queensland and towards the north Tasman Sea – this would allow it to grow even larger away from land.

However it’s too early to say what impact – if any – this storm may have on New Zealand. Computer modelling suggests it will drift south east towards New Zealand around March 16 to 20 but there could be a large obstacle in the way. “There will be a strong high pressure system around Tasmania moving into the NZ area around then. If the high moves in first it’s a bit like a truck reversing out into traffic, the low will either stop in its tracks, or have to take a different route out to sea around New Zealand”.

WHAT THE MODELS SAY AS OF TODAY:
ECMWF (Europe) for March 16th shows the cyclone north of NZ but the high from Tasmania coming in quickly and protecting the country:

GFS (America) for March 16th shows the cyclone tracking towards the North Island with plenty of low pressure around NZ. That same high is also in the forecast moving in from Tasmania:

I originally thought at least one of these lows could have been a drought breaker, but it doesn’t look so promising now

I guess that could change if the high slows down