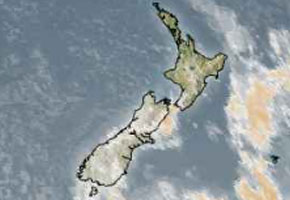 Places in the west from Auckland right down to Westport are experiencing strong winds from the west, Auckland has 50 km/h winds while New Plymouth and Westport has 60km/h westerlies. The east coast of the North Island has the warmest temperatures with Gisborne on 19 degrees.

Scattered showers are covering much of the North Island and a few of those showers are short and sharp with a rumble or two south of the Waikato in the west.

How is the weather near you this afternoon?