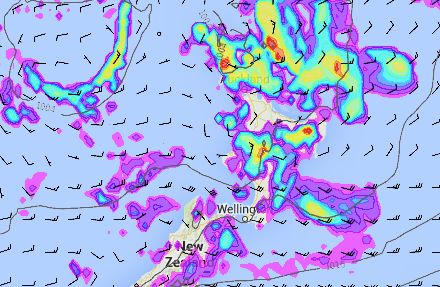 A low pressure system around the top of the country will today create more unstable weather conditions – with the possibility of heavy downpours this evening and overnight..

WeatherWatch.co.nz says the bulk of the rain with this low – which may rapidly form into tropical-like deluges – will very slow track southwards late today over the upper North Island.

“As we said on Monday this system is not a nationwide rain event but it does bring a fairly high chance of heavy rain or showers across dry parts of the upper North Island especially late Wednesday or overnight Wednesday and into Thursday morning”.

“This band of heavy rain or showers will track over parts of the upper North Island tonight but the heavy areas will be hit and miss and some regions will only have minimal rainfall totals”.

Mr Duncan says Northland will be exposed to possible heavy rain later this afternoon and into tonight – at this stage Auckland’s chances for heavy falls is Wednesday night and early Thursday morning and once again it may be hit and miss.

WeatherWatch.co.nz says the rain will be welcome by farmers even if it is heavier than some might want. Many farmers are still telling WeatherWatch.co.nz that conditions are drier than this time last year. With the hit and miss nature of this particular system it also means some in the driest regions may miss out on a significant soaking.

The low will cross the North Island over Thursday bringing rain to a number of central and southern regions  – for some it may be the first signs of rain relief in a month or two.  Rain will then push into the upper South Island will heavy falls possible later – again not widespread.

Government forecaster MetService is also watching the low closely and suggests rain warnings may be issued for northern areas.

No sign of incoming weather here in Hamilton guys. We sure need some rain so hopefully it doesn’t miss us. There was basically nothing here yesterday.