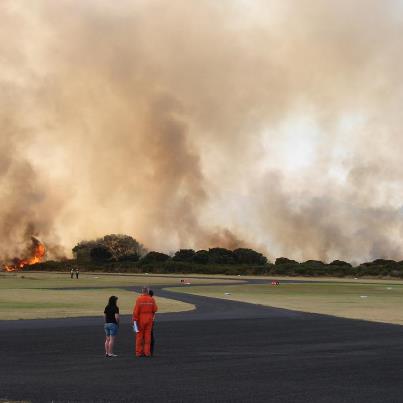 Winds are forecast to remain brisk and breezy for Great Barrier Island today and over the next few days which remains a concern for fire crews battling the fires.

At times it appears the situation is largely under control however pockets seem to flare up and it’s difficult to know when it’s fully extinguished.

Fire crews though are cautiously optimistic they have finally gained the upper hand over the huge blaze that has been burning through the week.

The Navy had been drafted in to help the large contingent battling fires on the Hauraki Gulf island as the threat of poor weekend weather kept dozens of firefighters on high alert.

The fire has been burning since Monday and has destroyed more than 100ha of bush.But Mr Cartelle said they were in a “good position”.Charred scrub was still smoking “and where there’s smoke there’s fire”, so fire crews were remaining vigilant, he said.
“The south east breeze does pump through here and we’ve got some additional strategies in case it does start to break out – we’ve got some retardant and we’ve still got two helicopters on the island” said Mr Cartelle.