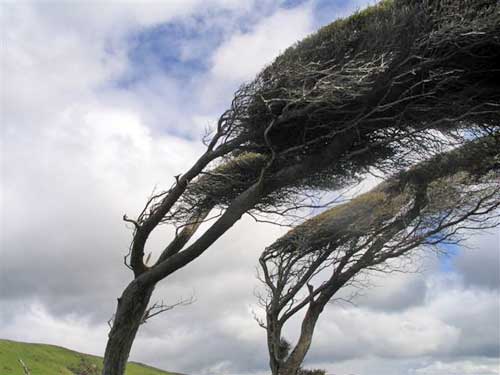 Severe gale force gusts across Wellington and other parts of the North Island and also Marlborough have been in force today. Reports of trees toppling and some roofing iron being lifted have also come in.

Rain further south has caused some surface flooding however it appears rain is beginning to ease and hopefully the worst is over. Temperatures have also been very cool with single figure highs being recorded so far today in the far south.

Winds are expected to ease over much of the North Island by this evening and tomorrow the country looks to be mainly clear overhead with gentle breezes expected for much of the nation.

On Wednesday another nor’ wester is expected to build ahead of a front and then the winds will revert to the sou’ west for a short period of time behind it.

Temperatures are high this afternoon in eastern parts of the North Island with Gisborne, Napier and Hastings recording temperatures into the mid to high 20’s with a blustery, hot nor’ wester.

Single digit figures for some parts of the South Island.