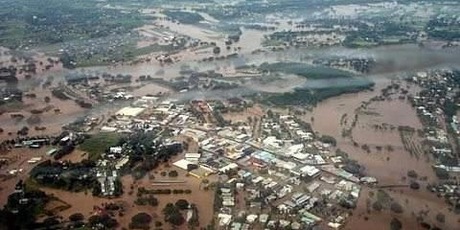 Travel plans came to a standstill yesterday for people heading to Fiji, and there’s little hope of stormy weather clearing in the next few days.

The main runway at Nadi International Airport was closed leaving travellers stranded in Fiji and disrupting the travel plans of at least 1000 in Auckland.

Heavy rains on the west of the main island of Viti Levu caused rivers to burst their banks. Officials said the rains were worse than the six-day deluge in January that claimed 11 lives.

Tutukaka resident Kate Malcolm was in Fiji for her sister’s wedding when the storm hit. Malcolm told the Herald on Sunday a 800m stretch of road had been washed away and Navo Bridge been damaged.

The Dive Tutukaka manager is staying at the Intercontinental Resort and Spa with her daughter and partner, and said winds gusts reached between 40 to 60km/hr.

Malcolm said about 60 people had checked into the Intercontinental Hotel yesterday morning, after they had tried to reach Nadi airport and were turned back.

Her father, former Minister of Immigration Aussie Malcolm, had tried to leave Fiji yesterday. He told the Herald on Sunday he had flown by helicopter to Nadi airport hoping to get a flight out but found on arrival all flights leaving Fiji had been cancelled.

The hotel had begun to conserve water in preparation for resources running out. Malcolm said the running water had been shut off and all the restaurants apart from one had been closed.

An Air New Zealand spokesperson said extra flights would be available today if the weather improved.

Air Pacific diverted a Nadi flight to Apia on Friday and cancelled a flight from Los Angeles to Nadi. Qantas and Air Pacific cancelled nine flights from Auckland yesterday and were uncertain about flying today.