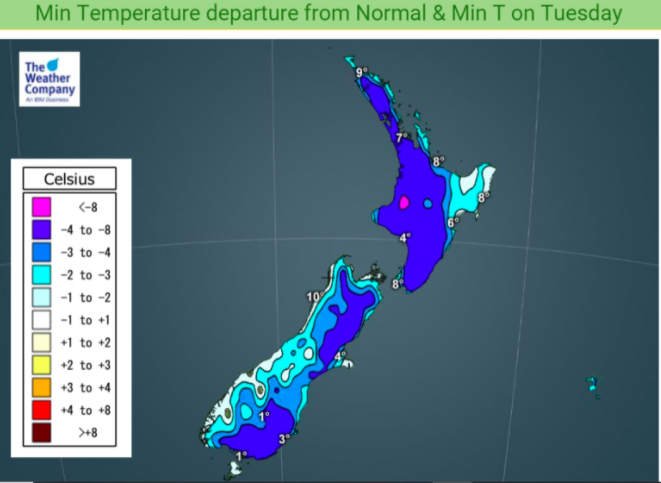 Subtle changes in the high-pressure belt lying across much of New Zealand will bring a very chilly Monday night to many parts, unless you are living close to the coast.

However, if you’re living close to the coast north of about Christchurch, across Cook Strait and up the North Island east coast to Gisborne and East Cape, tonight’s weak southerly will bring cloud and a few showers for some, particularly the further north you go, keeping temperatures cool but not significantly so.

Venture 10km or so further inland, though, and it’s a different story, with a cold – frosty in some spots – night for a broad swathe of the North Island sheltered from that southerly.

It’s also a cold night for inland parts of the South Island, although minimum temperatures will be about average along the West Coast and in Fiordland.

On Tuesday temperatures will be about average for the time of the year across most of the country, or even a touch milder on the western side of the ranges of both islands.

But that pesky south to southeasterly will keep things cooler than average by a couple of degrees in Hawke’s Bay and Gisborne.