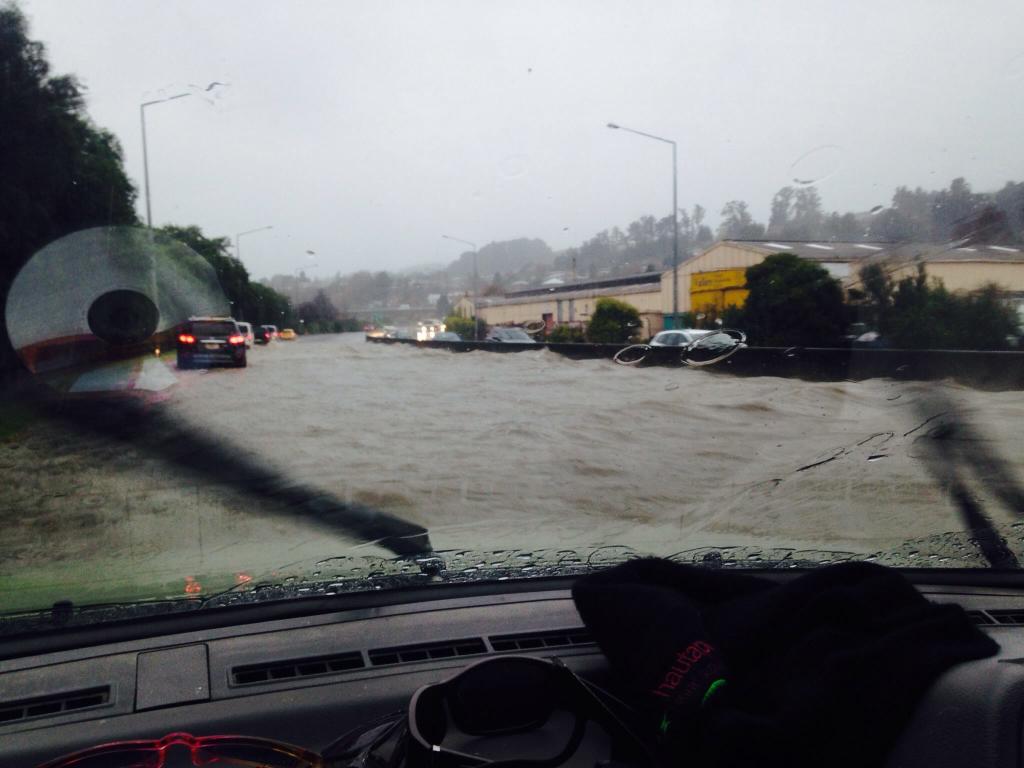 A Dunedin City Council spokesman said emergency services were now working together out of the civil defence bunker in central Dunedin, to coordinate their response to multiple flooding events across the city, and as the city prepare for high tide at 4.30pm.

Foul sewer contamination has forced the closure of the Hargest Crescent area in the suburb of St Clair. The Dunedin City Council said this could become an issue for other areas.

Water in Mcandrew Bay 30 kind ago. Seemed to still be rising pic.twitter.com/RG2OKpiFYF

Otago heavy rainfall update 5pm – click on the link below for details. http://t.co/J4mdPaInRN

People in low lying areas of Dunedin please be aware it is high tide now so water levels will be high. Please take extreme care

Otago heavy rainfall update 5pm – click on the link below for details. http://t.co/J4mdPaInRN

There are brave souls kayaking the Water of Leith #BigRainDN #dunedin pic.twitter.com/ZrobAglBLv

Some pics of our streets this afternoon #dunedin #flood pic.twitter.com/z0grF5MTaB

Dunedin has just set a new record for daily rain… Over 100mm. And unfortunately another 30 or 40mm on the way! pic.twitter.com/9KG7oqvX67

Added a pool to the backyard this afternoon. Kids will love it! @WeatherWatchNZ #dunedin #dunedinflood pic.twitter.com/6gs10LTOzX

Sand-bagging has started in Mosgiel and South Dunedin and schools are sending children home as torrential rain, which has caused bad flooding, continues to pound coastal Otago.

Almost 70mm of rain fell in Dunedin in the 24 hours to 11.50am, and firefighters from St Kilda, Willowbank, Brighton and Roslyn are tackling floods in South Dunedin, Ocean View and Caversham.

There are reports of heavy surface flooding in Kaikorai Valley and Forbury.

Roads have been closed and sand bags are being used to protect properties in South Dunedin and Mosgiel.

Are you in Dunedin? Send us your reports by posting a comment below!