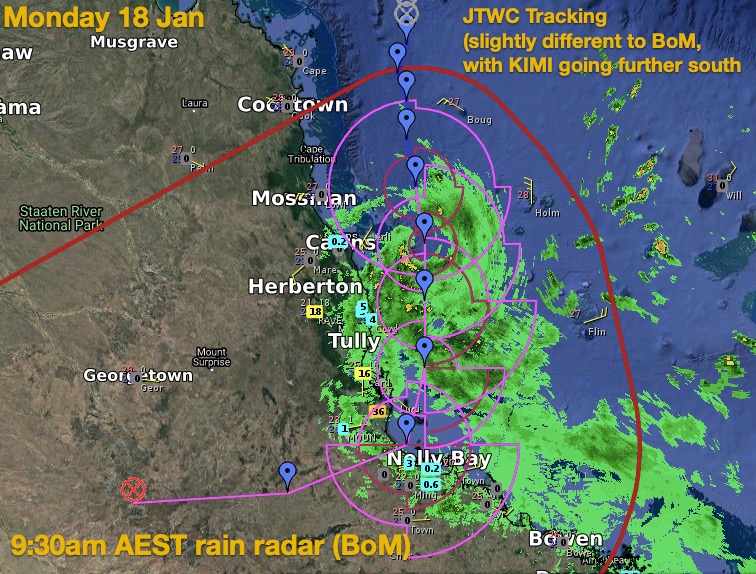 Australia — Residents between Cairns and Townsville are monitoring Cyclone KIMI which is expected to strengthen further on Monday before making landfall on Tuesday.

Kimi is currently located over 100km east of Cairns and Port Douglas and is moving south to south westward. The cyclone was Category 1 as of 9:30am AEST (12:30pm NZDT) but is expected to be Category 2 by the time it makes landfall on Tuesday.

The cyclone appears to be tracking a little further south than forecast earlier today and this has shifted likely landfall from Monday evening to now Tuesday at some point due to the shape of the coastline here.

High pressure between New Zealand and Brisbane will stop Kimi from tracking further south down the coastline and may well help weaken the storm across Tuesday as it guides it westwards, inland.

After landfall (likely on Tuesday morning but still isn’t locked in) the Tropical Cyclone is expected to weaken rapidly.

However, destructive wind gusts exceeding 130km/h could be brought to coastal and inland areas between Port Douglas and Innisfail on Monday afternoon or evening, or on Tuesday morning.

Heavy rain could be brought to the coastal and adjacent inland areas between Cape Flattery and Cardwell on Monday. The rainfall totals could exceed 150mm in the eastern coastal districts between Cairns and Ingham within next 24 hours from 1am on Monday. Precautions are required for the inundation in the low-lying areas and the flash flooding in the eastern coastal regions between Cooktown and Mackay on Monday. In addition, cautions are required for abnormally high tides on Monday, accompanied with the approach and the landfall of KIMI.

As the damaging or destructive wind gusts exceeding 120-130km/h could be brought to the eastern coastal and inland areas between Cairns and Ingham in the daytime on Monday, it is also necessary to be careful about power outages, collapse of buildings and trees.

Coastal damage and coastal flooding is also possible in some exposed beaches.

Keep up to date with BoM warnings and forecasts.

Kimi isn’t the only storm in the region. On Tuesday New Zealand is being hit by an even more powerful storm, but interestingly it’s not tropical it’s more of a ‘winter’ storm bringing gusts to 150km/h and 14 metre waves. Snow accumulations over 1.5 metres are even possible on the mountain tops.