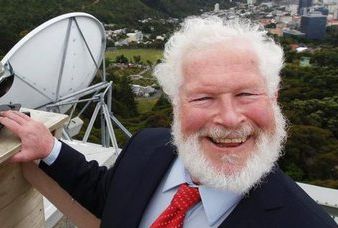 He has the hair of a fluffy cumulus cloud, he introduced the term “weather bomb” to New Zealanders and his title of “weather ambassador” is unique. Bob McDavitt retired last week from his long-held job with the state forecaster, MetService.

I met Bob in 1994 when I was setting up my first small weather business in my hometown of Te Aroha. When I had to call MetService one day I spoke to Bob and 18 years on we still chat. Back in 1994, I couldn’t know that in fewer than 15 years we would be on the same public stage talking about the weather, one that I have been honoured to share with him.

Bob and I come from different backgrounds. He is a meteorologist, I am an analyst. He loves to monitor storms from his office whereas my workload is the only thing stopping me from chasing tornadoes.

But we connect when it comes to dealing with the public. We are the forecasters who explain what is happening, in laypeople’s terms, to the media and to the public.

Bob is the master of words and analogies. His replacement, Daniel Corbett, may be from the BBC but he has big boots to fill.  Some scientists struggle to explain, in simple language, what the weather is doing. Some create weird analogies that don’t work. Others just don’t know how to simplify the message while capturing your attention. But, for Bob, it is a walk in the park.

His skills go beyond explaining the weather. He also knows how to talk to grassroots New Zealanders.

Bob’s retiring from the job, but not from the weather itself. His love for a combination of pattern and chaos will continue.

I understand he will continue to produce yachting forecasts. In the weather industry, each month brings new challenges.

While we have a rough idea about what’s coming up (the pattern) it is the unexpected (the chaos) that keeps us hooked. Because of the politics of the weather industry I don’t have the luxury of speaking to many of NZ’s meteorologists, but it is an honour to know Bob. For a long time he was the person between me and his head office in Wellington. Bob knew how to talk to me respectfully and for that I will always respect him.

I wish Bob the best of luck for his new future and I look forward to our next lunch – it must be my turn to shout him.

*Philip writes a weekly column for the Herald on Sunday

I knew Bob from my days in the Met. Office in the early to mid-1970’s. Bob has always been larger than life, ebulliant and inclusive, he glowed with enthusiasm as he preached ” weather “. He lived and breathed weather. He was always courteous and extremely helpful when dealing with complaints about the waywardness of weather and weather forecasts. Bob was the human face of the Met. Office.
Cheers Bob – may you have” fair weather and fair skies”in your retirement.

I met Bob once and he seemed to be honoured of meeting the founder of the NZ Thunderstorm Society. I felt quite honoured. This was in the 1980s when storm-chasing was in it’s infancy, not long after the movie “Twister”. Best luck to him in his retirement.

Bob was Brilliant! Came across really well to us non-scientific types, we could understand what was happening, and he was a joy to watch and listen to. All the best Bob.

All the best for the future Bob,an excellent forecaster and jovial person.