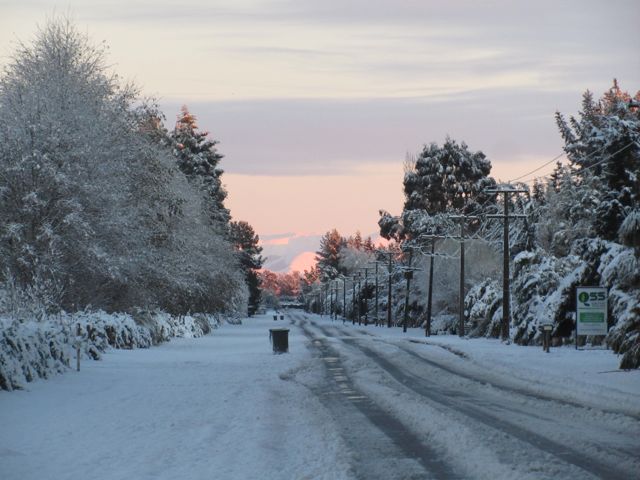 Not for the first time this winter that the south is grabbing the weather headlines and Dunedin, Timaru and Christchurch are set yet again to take on a wintry southerly.

“It’s quite unsual to have such cold conditions so early in the season” says South Island weather analyst Richard Green” Traditionally we have the coldest weather about four to six weeks after the shortest day and we’re still ten days away from it and so a few of us are wondering what could happen next”.

WeatherWatch.co.nz believes this southerly doesn’t have the same oomph that what was witnessed last week but it’ll still be cold nonetheless.Ice has been an issue for drivers in the south and the combination of ice and black ice has made some roads treacherous.

The snow and cold though has been great news for two skifields that opened up over the weekend for the season.
Mt Hutt saw about 1500 skiers hit the slopes on Saturday and further south Coronet Peak got underway for 2012.

Cold temperatures are expected to remain over much of the south this week and eastern areas could be the chilliest region of all as the southerly hangs around.

The southern half of the North Island will see the southerly move across the strait tomorrow with icy southerlies and a taste of winter for many.

WeatherWatch.co.nz says the bitter cold has yet to fully envelop the North Island so far this winter but it will just be a matter of time as the fronts continue to move in from the south.

Story and image of icy Canterbury roads by Richard Green

sea temperatures are normal around NZ, so not sure why you are thinking this cold trend will continue over the rest of the winter?, in fact it could be our turn to get a run of warmer northerlies just as easily after this run of cold southerlies

We’re not saying the rest of winter entirely but this week initially and more southerly outbreaks from time to time. Always a chance for northerly airflow which looks like could be here as early as next week but another southerly airflow is likely to follow.

Colder air this afternoon and tonight and much of the week for the south as per the article.