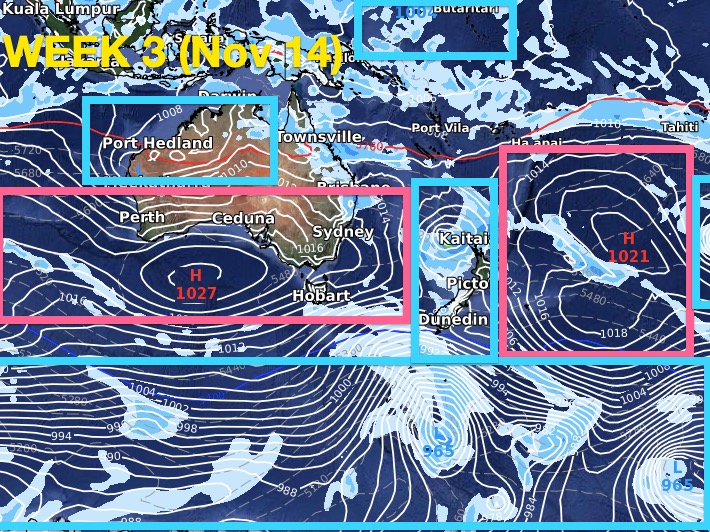 WeatherWatch.co.nz says a ‘moderate’ La Nina looks likely to impact the South Pacific and Australian weather patterns in the months ahead and November gets a taste of this with easterlies dominating and weekly rainmakers moving through the NZ area.

The South Island is looking more spring like with a few cooler southerlies in the mix but also plenty of big highs keeping eastern areas drier than usual.

WeatherWatch.co.nz says NZ’s location on earth means that while we are influenced by La Nina we’re also half way to Antarctica from the tropics, so the Southern Ocean storms and westerly flows can still impact NZ and this sometimes pushes La Nina weather patterns aside from time to time.

LA NINA
Scientists at Australia’s Bureau of Meteorology (BoM) say there is a 70% chance of La Nina forming this summer. La Nina is when sea surface temperatures (SST) are warmer than average in the western Pacific’s tropical zones. Warmer sea surfaces encourage more humidity, cloud and rainmakers into the NZ area from the north.

These exclusive ClimateWatch updates are a WeatherWatch.co.nz product — brought to you by www.RuralWeather.co.nz and our business partners at IBM.