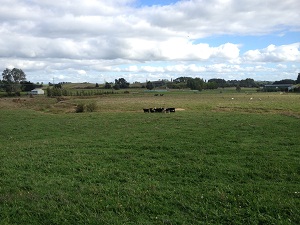 Monday got off to a wet start for the central North Island.  Late Sunday night and early Monday morning, a patch of precipitation moved onshore, bringing with it moderate rainfall.

During the overnight hours, the precipitation eased to scattered showers that affected not only the central NI, but upper and lower regions as well.  Pockets of rain are still possible this morning, mainly about the upper North Island.  Precipitation is expected to ease later this morning as drier air moves in and support for the showers falls apart.

For this afternoon, most of the precipitation should have come to an end, leaving both islands with settled weather for the rest of the day and into early Tuesday.

Tuesday afternoon, a new shot of moisture comes in off the Tasman Sea.  That will bring a chance for rain back to the western regions of both islands for Tuesday afternoon and Tuesday evening.