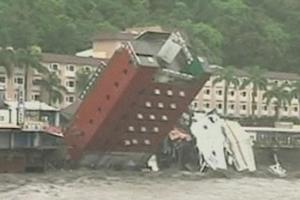 Was it just me or did the lady who was crying about her island going under water because of global warming seem fake? Seeing her on the news on Tuesday night made me feel that yet again the global warming debate falls into an element of extremism.

Her tears didn’t look real and her interview later on TV seemed rehearsed and not from the heart. I may be wrong, and if I am, then I truly apologise. But I’m so sceptical of everyone now…both sides… because all I seem to hear is alarmist views from both sides of the argument.

On twitter the other night I asked “Why is it both sides of the global warming debate are SO extreme. Where are the moderates? The intelligent ponderers rubbing their beards?”. (and no, I don’t assume all scientists are men). Recently at WeatherWatch we’ve been running a few stories on the climate change forum at Copenhagen and also the news stories on the “altered” scientific data. It set off a fierce and often offensive debate on both sides. Check out the angry comments posted (and feel free to add your own):
* Comments from Story 1

* Comments from Story 2
* Comments from Story 3
Both sides of the argument are so extreme. And we see this the world over. We see protestors who say governments aren’t doing enough. We see protestors who say this is the “biggest scam of our time”.
Those who even suggest that global warming isn’t manmade or perhaps isn’t as extreme as it’s painted by our governments are instantly labelled as “nut jobs” or worse. Then again, those in the majority – the scientists and governments of the world – don’t seem to want to sit down and discuss openly that perhaps some data is flawed – or at least help the public understand the data better.
Once a topic becomes political it’s hard to see the forest for the trees. Both sides throwing grenades at each other and hoping that when the dust settles the public now agrees with their point of view.
I’ve stated before I do believe global warming is happening and it is an issue. I’m pleased to see the US getting involved now at cleaning things up. What baffles me is why we can’t take simple measures first. Why didn’t the government provide solar power heating to every home in New Zealand 10 years ago? Why aren’t hybrid cars cheaper? Why aren’t we paid to recycle?
It feels like once it became a political subject the world went from denying climate change was happening to “it’s the apocalypse”.
What I don’t buy in to is the alarmist warnings – and this is from both sides.
By the way – global warming means just that. The globe is getting warmer on average. Being two small islands in the South Pacific means that we will still see big snow storms and cold snaps and have the coldest months on record etc. I often see “Global warming? Yeah right” in our comments section at WeatherWatch.co.nz when we run news stories on major cold snaps. Remember this is a worldwide issue that affects the most vulnerable first – and we aren’t the most vulnerable.
In saying that, without the environment New Zealand has no economy. We rely 100 per cent on being clean and green and temperate and unpolluted. We should support any law changes that reduce pollution, that reduce using unsustainable resources and that help make our air and water ways cleaner.
If you look at the planet as a human body I think the old adage “everything in moderation” probably works well.
I truly hope Copenhagen is a success… because while I’m not expecting the world to self destruct in the next 100 years I am keen to see it clean up its act. A trip to America or China will show you quite quickly how polluted and disgusting some parts of the world currently are.

There isn’t gonna be a solution if both sides are on offensive debate.

“….A trip to America or China will show you quite quickly how polluted and disgusting some parts of the world currently are”

Ever been to America ? Where ? It’s a pretty big place.
Is that like judging NZ’s fishing and “clean/greeness” by taking someone on a fishing trip to the inner water ways of the Tamaki River ?

Hi Phil
It appears you do want to take sides, and that your stance is with the global warmers’ viewpoints. Because you say the globe IS getting warmer. Getting warmer than – what? As you know the world was warmer during the Mediaeval period 1000 years ago than it is now. The planet has been cooling since 1998 and overall stable in NZ since 1958. The warmest year was 1934 (NASA Goddard). Just check any meterological station data in NZ (not, of course, around cities) since 1958 and see for yourself. You say skeptics are also extreme. How can that be? If something is not happening, it cannot be extremely not happening. What evidence do you have of any runaway warming, any sea-level rise beyond (NIWA’s study in Lyttleton in 1998) 1mm per year, or any ice-cap melt, other than what can be established as cyclic trends?
Ken Ring
Auckland

You are right to say that the most vocal in the discussions around climate change have been the extreme point of views. And these are driven by ideologies – or fear of ideologies. Unfortunately this has also been driven by shallow interpretation in the media.

But the fact that nearly 200 heads of state are joining in a global declaration of how important the risk of climate change is, shows that this has become a widely shared concern. Maybe the simple achievement of Copenhagen will be, that the question of whether climate change is happening will be pushed to the margin and how to mitigate and adapt to the consequences will now be established as a central concern.

The political implications of this are huge, and as Naomi Klein warns from Denmark, it boils down to political bargaining of how to share shrinking resources and increasing sacrifices. This will produce more conflict at all levels – globally, nationally and locally. And this will create stress for the old-fashioned institutions we have for making democratic decisions about the environment.

However, shifting the debate from the academic complexity of climate science to the more mundane political arena does open up the discussion to more participants. And with that comes the possibility for a more reasoned debate that you ask for. Confronted with a reality of on-going environmental change, it becomes clearer of how to choose one’s priorities, to negotiate compromises and to innovate alternative ways to make a living and to do so in a socially responsible manner. That would be my hope at least.

Rendt Gorter
The fact that nearly 200 heads of state are joining in a global declaration of how important the risk of climate change is, does not show that this has become a widely shared concern as much as it shows that there is still an international globe-trotting would-be elite who love conferencing at exotic places like Rio, Bangkok and Copenhagen, travelling business class and staying in the 5-star hotels, and seeking to continue at taxpayers’ expense this gravy train by whatever it takes to do so, including fiddling the figures and cooking the books if they have to. It has nothing to do with climate. You call that socially responsible? My prediction: Nothing will be achieved at Copenhagen except the declaration of the need to re-conference in a year or twos’ time, at another location, where they will all earnestly again plead for another “resolution” to this “global problem”. Yeah right.

Ken Ring didn’t say anything and therefore add to the fire.

The real issue is communication, not cooling or warming of the globe.

Humans have been on earth for no time at all, so far 1% of the time dinosaurs were on earth and dinosaurs give off more hot air than politicians… or do they?

A clear cut reason is always required but never given as all the shades between are naff.

Global anything is never going to be agreed on… end of story.

I live in hope!

This is my perspective. It is occuring, whether a fast or moderate rate is irrelevant. Such large c02 emmisions has to (as anyone cannot deny) have some negative effect. However, it’s not the problem that we should be dwelling on, it is the solution that takes priority, right? Now, the solution. the question now is, what really is the problem? i see that people are so fixed on a scientific answer to a percieved scientific problem, and indeed it has progressed to become a scientific problem, but is that the solution? No one can deny that fundamentally, the problem lies within human hands. So doesnt it appear logical to search for the solution within the same equation? The way i see it, advancements in science (attempting to find the solution) only increases efficiency (for humans) while compromising the ecosystems ‘well-being’. So i sort of see it as having a paradoxical affect, that is, in attempt to find a scientific solution. Am i wrong or does the solution lie in social reform? I understand that within the field of sociology, hegemonic ideology is slow to change and hard to challange, but time is something (if acting now) we have on our side. Am i an idiot, or does this make sense?