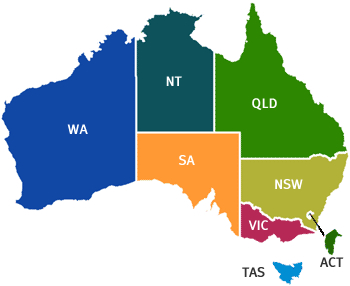 Parts of Western Australia and South Australia have just had their warmest day since winter and parts of New South Wales and Queensland are about to.

Normally this would happen in late August or September but an unusually warm airmass formed over WA on the weekend and it is being drawn across the south of the country by northwesterly winds.

We are still in the first week of August and temperatures are reaching the mid to high 20s, four-to-eight degrees above the August average.

Tuesday will be the turn for parts of central Australia and also parts of NSW and Queensland.

Parts of northern SA and the area between Sydney and the Gold Coast can expect their warmest day for winter so far. Places which should achieve this are Penrith, Gosford, Newcastle, Taree, Port Macquarie, Coffs Harbour and Coolangatta.

Unseasonably warm northwesterlies will give way to colder southwesterlies on Wednesday and Thursday as a cold front crosses the region. The front will lower temperatures by as much as seven or eight degrees before it warms up again in time for the weekend.

Has anyone recently returned from across the ditch? What did you make of temperatures there this winter?

Good morning. I have just returned from spending 1 month with family in Perth area Bertram about 1 hour sth of CBD.

Winter for them comparing with previous visits was warmer during the day beautiful sunny days clear blue sky night & morning cold getting down to 1deg and in some inland area’s even lower media were saying coldest winter in a long time.

The rain fall is down for this period looks like there will be water restrictions for therre summer which you learn to live with in Perth. Had the odd storm at night very heavy tropical type rain with strong winds doesn’t last long… returning again for Christmas hope we don’t get a heap wave.

Hi Lynne, thanks for your first hand report – much appreciated. Interesting that they are cold while Sydney is warm.