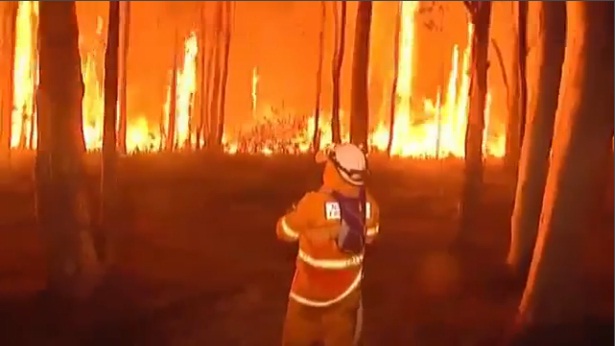 Rural fire chief says some communities to Sydney’s west might be ‘simply unsaveable’.

The unique landscape that made disaster inevitable could now help create a megafire engulfing vast areas to the west of Sydney and threatening the outskirts of Australia’s biggest city.

Late yesterday firefighters were locked in a desperate battle to prevent major fires at Lithgow and in the Blue Mountains from joining into a vast, single front stretching across hundreds of kilometres of often rugged country.

A warning for the massive State Mine blaze near Lithgow was one of three top-level emergency alerts that were in place last night. Bushfires flared up as the feared hot and gusty conditions began to materialise.

The Rural Fire Service also issued an emergency ‘get out’ warning for the Springwood fire in the lower mountains, which flared up again near Faulconbridge. Residents were urged to monitor the RFS website and local radio for evacuation orders.

An emergency warning was also declared for a bushfire at Balmoral in the southern highlands, which is blowing burning embers into the town of Wilton, southwest of Sydney. Residents there have been told to watch for spot fires that may begin on their properties and seek shelter as the fire front approaches.

Mt Victoria was under a watch-and-act alert. Almost 60 fires were burning in NSW yesterday, 15 of them out of control. Overall, a state of emergency remains in force. The Defence Force was on standby to help if needed.

With temperatures continuing well into the 30s and strong northwesterly winds predicted to peak tomorrow, volunteers were yesterday risking dangerous backburning in the hope of saving entire communities from destruction.

Large centres such as the Blue Mountains towns of Katoomba and Leura lie in the path of the potential megafire.

“The reality is that the modelling indicates that there’s every likelihood that in the forecast weather conditions that these two fires, particularly up in the back end of the mountains, will merge at some point,” Rural Fire Service Commissioner Shane Fitzsimmons said.

“I suspect (the two fires will meet) somewhere in the middle of the Grose Valley. It’s only about 3 to 5 kilometres apart in some areas, it won’t take that long for (them) to join together.”

Burning embers blown dozens of kilometres ahead of firefronts pose further threats, and authorities warned that the fires that razed Winmalee in the Blue Mountains could flare again.

The fires have already destroyed more than 200 homes, damaged hundreds more and razed other buildings and more than 40,000ha. The insurance bill has topped A$94 million so far, with 855 claims made and many more to come.

Smoke blanketing Sydney and reaching hundreds of kilometres along the coast north and south of the city has interrupted flights at Mascot airport, blocked aircraft from joining the battle, and created serious health hazards.

Containing burned particles and gases including carbon monoxide and nitrogen oxides, the vast smoke plumes pose risks for people with heart or lung disease, pregnant women, young children and the elderly. Studies have found that deaths during earlier smoke-filled periods in Sydney rose by about 5 per cent and increased the risk of heart attack in Melbourne.

Health authorities have warned those at risk to stay inside with doors and windows closed and to avoid exercise.

Without heavy rain, there is little chance of containing the major fires for days at least.

University of Wollongong bushfire expert Ross Bradstock says the conditions for a perfect firestorm had been laid by the unique vegetation of the Sydney Basin, human activity, and scorching, wind-blown days.

Writing in the online academic journal The Conversation, he said 70 per cent of the region was covered by vegetation known as sclerophyll, whose hard leaves are slow to break down but rapidly accumulate as litter. With dense scrub the country becomes a tinderbox. Humans have added to an already high risk, moving to the bush and building towns in highly fire-prone areas without the cleared buffer zones needed to enable buildings to survive.

Most fires start close to human development, and Bradstock warned that the natural barriers of gullies and south-facing slopes have been overwhelmed by hot, dry conditions.

“These fires won’t go out soon, particularly the ones in remote areas, unless we get heavy rain,” he wrote.

“It’s awful to think, no matter the motivation, that we can have young people so reckless and so stupid participating in these sorts of activities,” Fitzsimmons said.

Police are also investigating a handful of reports of looting, with warnings of severe punishments including 14-year jail terms for anyone convicted of “the lowest of crimes”.

Premier Barry O’Farrell said: ‘I’m just appalled that at these critical times, when people have been evacuated from homes or whether people have left homes because of fire dangers, that other scumbags in the community would front up and seek to rob them.”