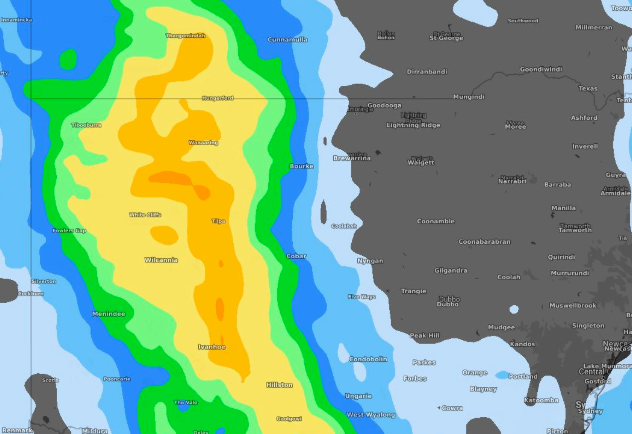 Some much needed rainfall is on the way for far northwestern parts of New South Wales and southwest Queensland.

A trough crossing South Australia on Easter Sunday will slow down on Monday over far western NSW and interact with the humid winds being pumped in from the Coral and Tasman Seas. This mixed in with a cold, upper-level low makes for likely showers and some thunderstorms over the drought-declared areas.

Image: Forecast Rainfall in the 48 hours to 10pm Monday from ACCESS-G

Thunderstorms are more likely to occur in southwestern QLD but are still possible in northwest NSW and could produce some isolated heavy falls.

Unfortunately, rainfall will be far more patchy outside of these areas, with only 40-60% of 5-10mm for places such as Birdsville in QLD and Broken Hill and Bourke in NSW. Models are also very inconsistent with rainfall in southern NSW in areas like Hay and Wagga Wagga.

From Tuesday, this trough and instability should move northeast towards central QLD, where some places could also enjoy a good drink. However, these showers and storms are likely to be far more spread out, making it easier to miss out.