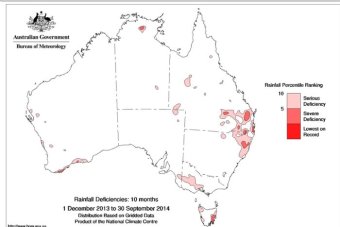 While areas of Queensland and northern New South Wales have had some of their driest two-year periods on record, long-term rainfall deficiencies are also developing in western Victoria, south-eastern South Australia, parts of Tasmania and Western Australia.

“Places further south, particularly over the last several months, have seen a lot of large high pressure systems basically keeping the rain away and keeping the fronts away, so that’s led to deficiencies in rainfall, particularly over grain growing areas of Victoria and into parts of Western Australia as well,” Dr Watkins said.

Ian McClelland, who farms north of Birchip in Victoria’s Mallee region, says after a good autumn break, winter and spring rain was disappointing.

“Crops just really had to fend for themselves, on their subsoil moisture. A lot of our wheat on our heavier country has sort of tipped and burnt off.

“I’m expecting yields across the board about 30 per cent of average.”

Ron Storey, of Australian Crop Forecasters, predicts the overall national grain crop could be down about 10 per cent on last year’s harvest total of 43 million tonnes.

The wheat crop is also likely to be lower than had been anticipated.

“In early September, we were at 24 million tonnes. We’re slipping below that.

“We haven’t put our October forecast just yet, but we would say the potential is there, depending on what happens for the balance of October, to lose up to 10 per cent. We could see a worst case scenario of getting down to about 22 (million tonnes).”

A national wheat crop of 22 million tonnes would be in line with the long-term average, but down on recent harvests.

“That’s a 15 to 20 per cent shift in what the average crop is when you look at those two periods of time.

“I think what that tells us is that we’ve actually had five quite unusually very good seasons Australia-wide up until now and perhaps we are experiencing some of those very, very dry conditions this year and we are at a localised level compared to what we’ve seen for the past ten years.”

As well as being down on volume, this year’s crop is also likely to be well down on value, with big harvests in the northern hemisphere pushing global prices down about 10 per cent on what growers achieved last year.

“Whilst crop production might be down something in the order of 10 per cent, compared to last year, total crop value is more likely to be down 20 per cent because of the drop in price values as well,” Mr Storey said.