Australia: Brisbane turns up the heat for G20 summit 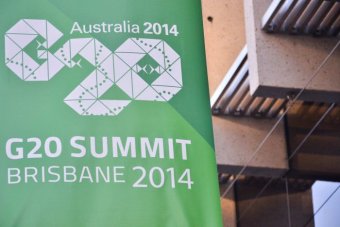 Temperatures in the high 30s and evening thunderstorms will hit Brisbane as delegates meet for the G20 summit this weekend.

The Bureau of Meteorology (Bom) has forecast maximums of 32 degrees Celsius on Friday, 35C on Saturday and 38C on Sunday for the Brisbane CBD.

There was the chance of thunderstorms on Saturday and Sunday, in the afternoon and evening.

“We could actually get close to breaking some records,” Mr Threlfall said.

“We could see around 21 Friday night, 24 Saturday night, and 24 again Sunday night, so some really hot, humid nights as well,” he said.

Protesters taking part in the G20 Peoples’ March organised by the Brisbane Community Action Network for Saturday would be among those bearing the brunt of the heat.

They will set out at 11:00am to walk about 2 kilometres from Roma Street in the CBD to Musgrave Park in South Brisbane.

“We’ll encourage people to be with buddies, stay safe, wear a hat, drink lots of water, put sunscreen on… whatever one needs to do to stay safe in a hot and potentially stressful environment,” supporter Robin Taubenfeld said.

“We’ll do our best to make sure people are supported.”

Deputy Commissioner Ross Barnett said conditions would be “oppressive” for officers and protesters.

“It’s far from ideal but we will just have to deal with the circumstances that that are being presented to us,” he said.

“We’d obviously like it to be a lot cooler than that, but it’s not going to be.

“The health and welfare of our officers and protesters is going to be another factor that we’re going to be very conscious of.”

The Rural Fire Service says volunteers and emergency crews are preparing for a longer than usual fire season.

Assistant Commissioner Neil Gallant said this weekend would be a stern test.

“Certainly the weather conditions this weekend are the worst so far this fire season but I think we’ve got a fair way to go,” Mr Gallant said.

“Sometimes our fire season finishes in December – this year I think it’s going to go longer past December, so we’re certainly preparing for a long season.”

More than 20 blazes are currently burning across the state, with the arson squad monitoring all fire developments.

Landowners have been urged to ensure all hazard reduction burns are fully extinguished.