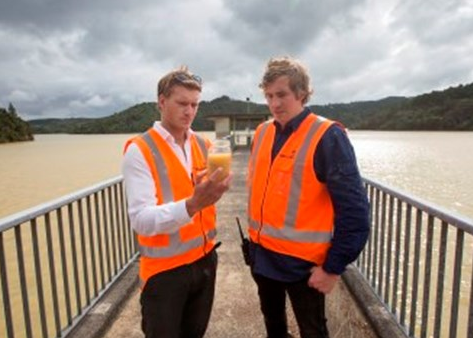 Aucklanders have reduced their water consumption following requests by Watercare but more savings are urgently needed. Everyone is being asked to use 20 litres less water per day.

This is because this weekâ€™s storm has restricted the treatment capacity of the cityâ€™s largest water treatment plant.

â€œOur Save 20 target is easily achievable,â€ says Watercare Chief Executive Raveen Jaduram. â€œTo put it in perspective, itâ€™s only a few minutes less in the shower and turning off the tap when brushing teeth.â€

â€œArdmore Water Treatment Plant, which supplies up to two thirds of the Auckland regionâ€™s water, is continuing to operate at half its capacity due to an unprecedented level of silt in the water coming from the Hunua dams.

â€œWe are maximising production at our four other metropolitan plants which include those in Waikato and Huia.

â€œCurrently we are meeting demand â€“ none of our customers are without water â€“ and the quality of the water has not been compromised. Itâ€™s safe to drink straight from the tap.

â€œThe situation at Ardmore is stable but if we canâ€™t achieve the targeted water usage savings we may be forced to release partially treated water into the region’s supply. In such a situation, a boil water notice would be issued.â€

Last night saw approximately 100mm of rain fall in the Hunua Ranges and Waitakere Ranges, which is where nine of our water storage dams are located.

â€œThe clarity of the water entering the Ardmore Water Treatment Plant is still about 100 times worse than what we would expect to see entering the plant.â€

Watercare says water quality has not been compromised; however it is essential that everyone reduces their water use until the end of the month.

This applies to everyone connected to Aucklandâ€™s metropolitan water supply network â€“ those living as far south as Pukekohe and as far north as Waiwera.

Itâ€™s easy to save water:

On a side note but related to the flooding:

â€œRural Support Trust is asking farmers with information about what is happening in their area or if they are experiencing any issues to please call them on 0800 787 254.â€