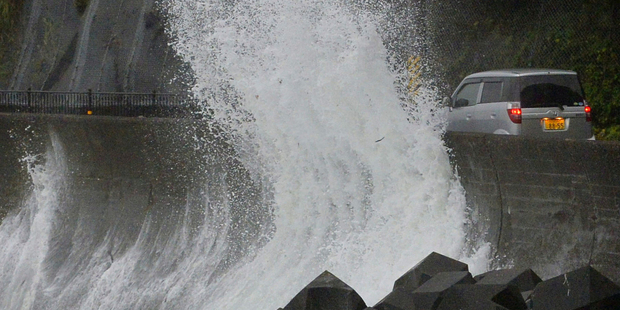 Typhoon Halong has slammed into western Japan after 1.5 million residents were ordered to evacuate their homes in the southwest of the country.

The typhoon made landfall near Aki, Kochi prefecture, on Shikoku island at around 6am (0700 AEST) on Sunday, an official at the Japan Meteorological Agency said.

On Saturday, the agency issued its highest warning for Mie prefecture, some 300km west of Tokyo, as the outer bands of the storm were already lashing the region and other areas of southwestern Japan.

The warning means that the storm poses a threat to life and could inflict massive damage, the meteorological agency said.

The agency said the levels of torrential rain monitored in Mie were already “unprecedented”, which could trigger massive landslides or cause major floods.

Television footage showed high waves triggered by the typhoon splashing over breakwaters and muddy torrents roaring down a swollen river.

At least 143 flights will be cancelled on Sunday due to the typhoon, which came as Japan had just begun its annual “Obon” summer holiday, NHK said. On Saturday some 470 flights were grounded. Typhoon Halong, packing winds of up to 180km/h, was moving northeast at 20km/h, the agency said.