Antarctic sea ice extent bottoming out at lowest on record 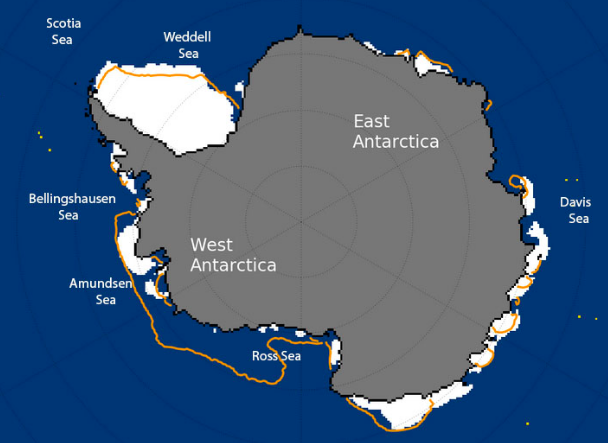 As summer draws to a close across the Southern Hemisphere, the extent of sea ice ringing Antarctica has fallen to the lowest values ever observed in satellite records dating back to 1979. On Wednesday, March 1, the daily extent data from the National Snow and Ice Data Center (NSIDC) showed 2,109,000 square kilometers of Antarctic sea ice, its lowest value on record. That value nudged up slightly on Thursday, but a more useful measure, the five-day rolling average, hit its lowest value yet on Thursday (see Figure 1 below).

We can expect the regular autumn rebound in southern ice to kick in very soon now. However, this has been a notably persistent melt season–one that wouldnâ€™t take too much longer to break a record for tardiness. If Thursdayâ€™s five-day average turns out to be the lowest for the summer, it will be tied with March 2, 1991 for third-latest minimum behind March 6, 1986 and March 3, 2003.

â€œIt could start trending upward any day,â€ sea ice expert Walt Meier (NASA Goddard Space Flight Center) told me on Thursday. â€œOf course, this year has been rather unusual, so it would not surprise me to see it going into unprecedented territory.â€

Figure 1. Sea ice extent for the five-day period ending March 2 (right-hand end of pale blue line) is lower than at any point since satellite measurements began in 1979. Averaged over the preceding five days, the extent on Thursday, March 2, was 2.113 million square kilometers. The next-lowest value for this date, in 1997, had about 236,000 more sq km than 2017. Image credit: NSIDC.

A head-turning switch
For now, at least, Antarctic sea ice has relinquished its role as a poster child for counterintuitive events on a warming planet. Unlike the Arctic, where sea ice extent, area and thickness have all undergone dramatic dips consistent with human-produced climate change, the Antarctic has not only held its own but expanded to record-high extents at times. The southern summers of 2013, 2014, and 2015 each retained enough sea ice to rank among the five highest minimums in yearly extent since 1979.

If you find it odd that Antarctic ice has proven so resilient, youâ€™re not alone. A majority of simulations carried out in support of the most recent IPCC report predicted that Antarctic sea ice coverage should have declined between 1979 and 2013. In a 2015 review paper published in Nature Climate Change, a group of Antarctic experts identified some factors that may be enhancing regional sea ice production in spite of global warming. These include:

–stronger westerly winds ringing the continent
–increased meltwater flowing into the Southern Ocean
–a stronger prevailing low in the Amundsen Sea. This tends to favor cold offshore flow and enhanced ice production in the Ross Sea, with mild onshore flow and reduced sea ice in the Amundsen-Bellinghausen region.

Figure 2. Sea ice extent on Thursday, March 2, 2017 (white area) compared to the average extent for this date in the period 1981-2010. Most of the deficit this year is in the Bellingshausen, Amundsen, and Ross Seas, which are typically the areas hardest hit during summers with low sea ice extent. Image credit: NSIDC.

What will autumn bring?
While this yearâ€™s minimum is a clear record-setter, it shouldnâ€™t pack the same regional punch as weâ€™ve seen from similar events in the Arctic. Thereâ€™s an increasing body of work showing connections between newly opened water in the Arctic, especially in autumn, and the weather and climate of the subsequent winter over both poles and midlatitudes. But several factors work to blunt the impact of low sea ice extent in the Antarctic, according to Meier. For one, â€œthe ocean is much more dynamic than in the Arctic, so any extra heat that gets absorbed gets mixed fairly quickly,â€ he said. â€œPlus, there is a very white, very cold continent right next to the ice, so that helps cool things down quickly.â€ Big swings from maximum to minimum extent are also the norm in Antarctica, where such swings are about 60% bigger on average than in the Arctic.

La NiÃ±a events tend to strengthen the Amundsen Sea Low mentioned above, and the frequent La NiÃ±a conditions from about 1999 to 2014 may have helped bolster Antarctic sea ice. Since then, El NiÃ±o conditions have predominated, and thereâ€™s another El NiÃ±o event potentially taking shape for 2017-18. If so, then we might see another big bite out of Antarcticaâ€™s late-summer sea ice next year. But the regionâ€™s climate is so complex and variable in both time and space that itâ€™s risky to offer predictions.

â€œItâ€™s possible that weâ€™ll look back in a decade and see this year as a turning point when the Antarctic sea ice finally started to feel the long-term global warming influence above the natural variability,â€ Meier told me. â€œBut we may also look back and see this year as an unusual blip in the time series–an anomalous spike that is quickly gone.â€

The big fracture in the Larsen C shelf: Itâ€™s still there
A chunk of ice as large as Delaware continues to cling to the Antarctic Peninsula, but an ever-lengthening crack is likely to sever it in the not-too-distant future. Now extending more than 100 miles, the crack in the Larsen C shelf is roughly 1000 feet wide and about 1500 feet deep. More than half of the crackâ€™s length has developed since 2010. If it proceeds for another 20 miles, which may happen in the next few months, then it will release an enormous iceberg (or collection of smaller icebergs), perhaps one of the largest on record. The New York Times has an excellent multimedia feature on the physics and geography of the crack.

The largest iceberg measured by satellite in Earthâ€™s history, Iceberg B-15, broke off of Antarcticaâ€™s Ross Ice Shelf in March 2000. Iceberg B-15 was about 1.7 times larger in area compared to the chunk about to break off from the Larsen C ice shelf. According to the Guinness Book of World Records, the largest tabular iceberg ever observed was approximately three times the size of B-15, at over 12,000 square miles. It was 208 miles long by 60 miles wide, and was sighted 150 miles west of Scott Island in the Southern Ocean by the USS Glacier on November 12, 1956 (thanks go to WU member lifeblack for this info.)

The apparently doomed slice of Larsen C wouldnâ€™t affect sea level rise directly, since it is already floating. The real concern is that its loss might destabilize the balance of forces that keeps a much larger area of glacial ice behind Larsen C from flowing off the Antarctic Peninsula and into the sea. According to a Washington Post article filed by Chris Mooney, researchers believe enough ice could flow seaward in the wake of a Larsen C collapse to raise sea level by as much as 10 cm (3.9 in).

The Larsen shelves lining the east coast of the peninsula are disintegrating in alphabetic order, it seems. The relatively small, furthest-north Larsen A collapsed in 1995, and the gradual disintegration of Larsen B should be complete this decade after a large chunkâ€”about half the breadth and depth of the vulnerable Larsen C chunkâ€”detached into the sea in early 2002.

â€œIceberg calving is a normal part of the glacier life cycle, and there is every chance that Larsen C will remain stable and this ice will regrow,â€ said Paul Holland (British Antarctic Survey) in a BAS news feature on February 21. â€œHowever, it is also possible that this iceberg calving will leave Larsen C in an unstable configuration. If that happens, further iceberg calving could cause a retreat of Larsen C. We wonâ€™t be able to tell whether Larsen C is unstable until the iceberg has calved and we are able to understand the behaviour of the remaining ice.â€

A 2016 study led by scientists from Swansea University and BAS concluded that the main cause of glacial retreat along the west side of the Antarctic Peninsula since the 1990s has been ocean warming. There is no direct evidence on whether the Larsen C rift is a product of climate change, but the peninsula as a whole has been warming rapidly since the 1950s.

Figure 4. Established in 1953 and now one of 76 Antarctic research stations maintained by 30 countries, the Argentine-managed Esperanza Base sits near the northern tip of the Antarctic Peninsula. This photo was taken on January 15, 2016. Image credit: Godot13, Wikimedia Commons.

And speaking of warming on the Antarctic Peninsulaâ€¦
The official record high for the continent of Antarctica is now 17.5Â°C (63.5Â°F), according to the World Meteorological Organization. In a news release issued Wednesday, the WMO announced that a committee of experts (including WU weather historian Christopher Burt) had investigated and confirmed the new record. It was set on March 24, 2015, near the tip of the Antarctica Peninsula at the the Argentine research station Esperanza Base.

A post written by Chris Burt on March 26, 2015, explains in detail the complexity of determining exactly what qualifies as Antarctica when it comes to weather records. For the â€œAntarctica Region,â€ defined by the WMO and UN as all land and ice south of 60Â°S, the all-time high remains 19.8Â°C (67.6Â°F), recorded at Signy Research Station, Signy Island, on January 30, 1982.

An important caveat from the WMO: â€œIt is possible, indeed likely, that greater extremes can and have occurred in the Antarctic Region. However, the extremes presented here are the highest observed temperatures placed before the WMO for adjudication. When higher extreme events are effectively recorded and brought to the attention of the WMO, subsequent evaluations of those extremes can occur.â€

Next week: Potential threat for Madagascar next week from Tropical Cyclone Enawo
A tropical cyclone long predicted by models to develop in the southwest Indian Ocean is finally taking shape. As of Friday morning, the Joint Typhoon Warning Center was projecting that Tropical Cyclone Enawo would vault to Category 4 strength, with top winds of 125 knots (145 mph), as it nears the east coast of Madagascar by next Wednesday. Earlier this week, Jeff Masters and I covered the Southern Hemisphereâ€™s oddly quiet tropical cyclone season to date. We’re keeping an eye on Enawo.

Have a great weekend, everyone!