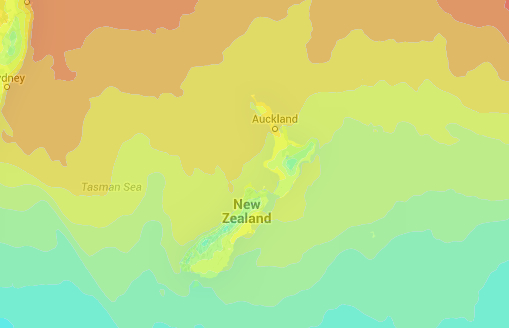 We’re in for a cold change on Wednesday, as cooler air moves up the lower South Island, causing temperatures to fall, in some cases, pretty dramatically – and it could even bring some showers to the drought zones of North Otago and Canterbury.

The change should be gone as quickly as it arrives, however, with remnants pretty much disappearing by Thursday – though the morning will still be cold!

For the top of the North Island, easterlies will stay dominant, and temperatures will stay high – overnight lows shouldn’t get much down beneath the mid teens, which are looking like daytime highs at the other end of the country!
Weather wise, it should stay mostly dry – a bit of cloud about, and there is the chance of a shower, but for the most part it’s looking dry with light winds and sea breezes only.

For Wellington and the eastern North Island, norâ€™easters will drive in some cloudy periods and there’s the chance of a shower, especially near the ranges later on in the day.
Temperatures will stay mild, daytime highs in the early to mid 20s range.

In the deep south, early rain activity is likely to clear from the Southland coast in the morning, with patchy showers in store for Otago, which dries out again in the afternoon.
The cold change is coming for these regions – in the neighbourhood of around 10 degrees(!) below what you’ve been used to so far this year…

Further north, Canterbury should receive a few showers with that southwesterly change moving in, hopefully to inland areas that desperately need it – but it will be hit and miss – not widespread and consistent, unfortunately.

On the West Coast, things are looking fairly cloudy, with showers likely south of Hokitika – maybe even some steady rain – and winds from the west.

Marlborough and Nelson are looking at a mostly day, and northwesterlies – there is a small chance of a shower but otherwise it’s shaping up pretty calm and settled.